Discovery Cove has been our favorite Orlando-area park since the first time we visited. The first time we visited was the only time we did the dolphin swim. We have been back twice for the resort day, most recently March of 2016 during spring break, the week right before Easter. This was the best decision ever considering how crowded everything was that week. I think it’s a pretty good value if you factor in the included meals and drinks, plus 14 days at SeaWorld and Aquatica. It’s even a better deal if at least one of you adds on Busch Gardens plus free parking for $25, because you will spend more than that on parking if you just spend one day each at SeaWorld and Aquatica. Anyway, once you factor in everything that’s included with the $199 day resort package (SeaWorld+Aquatica 14 day pass $140, breakfast and lunch $20, snacks $5, drinks $15. Total $180) I figure my resort day costs me about $20, so it’s practically free! Plus you get to keep the snorkel and a photo as souvenirs. So really, it’s free.

The morning of our DC reservation I looked outside and it was dreary rain and dark skies. The forecast for the day on the Weather Channel said “Rain”. I was disappointed and called Discovery Cove. They offered to let me save my reservation for some other time, but they were booked solid for the time we were in Orlando. So we decided to go, hoping it would clear up. By the time we arrived it had cleared up, and it stayed sunny most of the day. Florida weather lesson 101, it will almost always clear up. We were so glad we went because it ended up being a perfect day to be outside.

As soon as we arrived at DC we got our breakfast. Can you tell which one is my daughter’s? I had to force the biscuit on her plate. She did not eat it either. Her breakfast was a chocolate chip mini-muffin and a bite of a french toast stick.

Then we headed off to get our swim vests, snorkels, towels, and locker. This always takes us a while as we are unorganized but thankfully it’s not crowded at DC and you have all day, there are no lines except for food. Before we even got in the water we went straight to the aviary, figuring the birds would be hungriest and therefore friendliest first thing in the morning (or 10:30, close enough).

Then we headed to the Wind-away River. It’s like a mile long lazy river but it’s not lazy because you have to swim in areas where the water is deep. You can wear a life jacket or use a noodle and most people do. You go through waterfalls to go in and out of the aviary via the river, so your head gets drenched. If you wear contacts this is no fun but I wear a bucket-type hat and it keeps the water mostly out of my eyes.

Then we went to the Tropical Oasis which is the newest area. The water is really warm, so even on cooler days it feels really good to swim in. 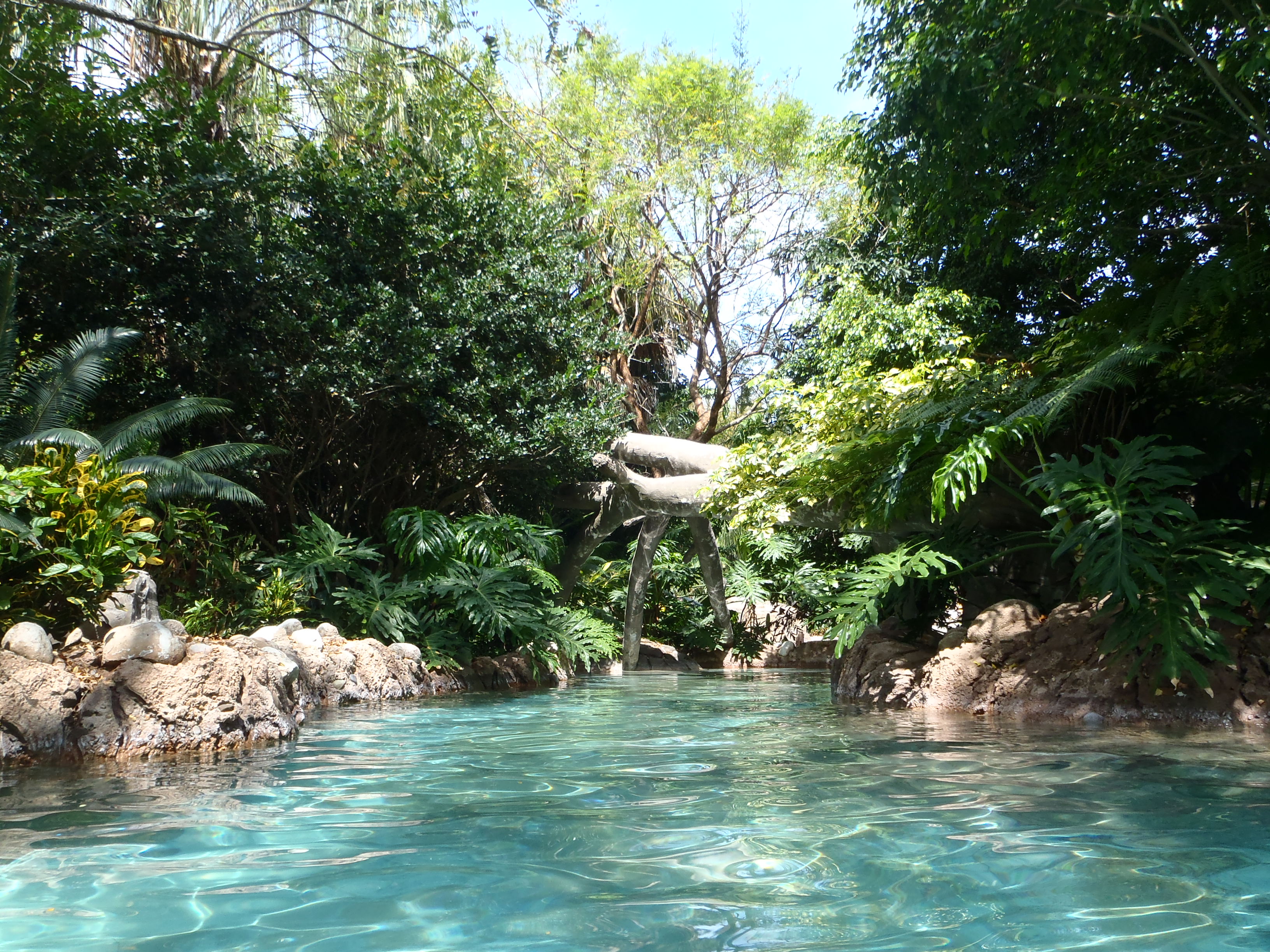 There is an island with Geoffroy’s Marmosets on it in the middle of the oasis. There are also river otters which are really cute.

My daughter won’t go in the Grand Reef (the Stingray lagoon) because the water is cold so we just walked on the overlook trail and took a couple pictures. The sharks are separated, so you don’t actually snorkel with them, and the stingrays have been de-barbed. 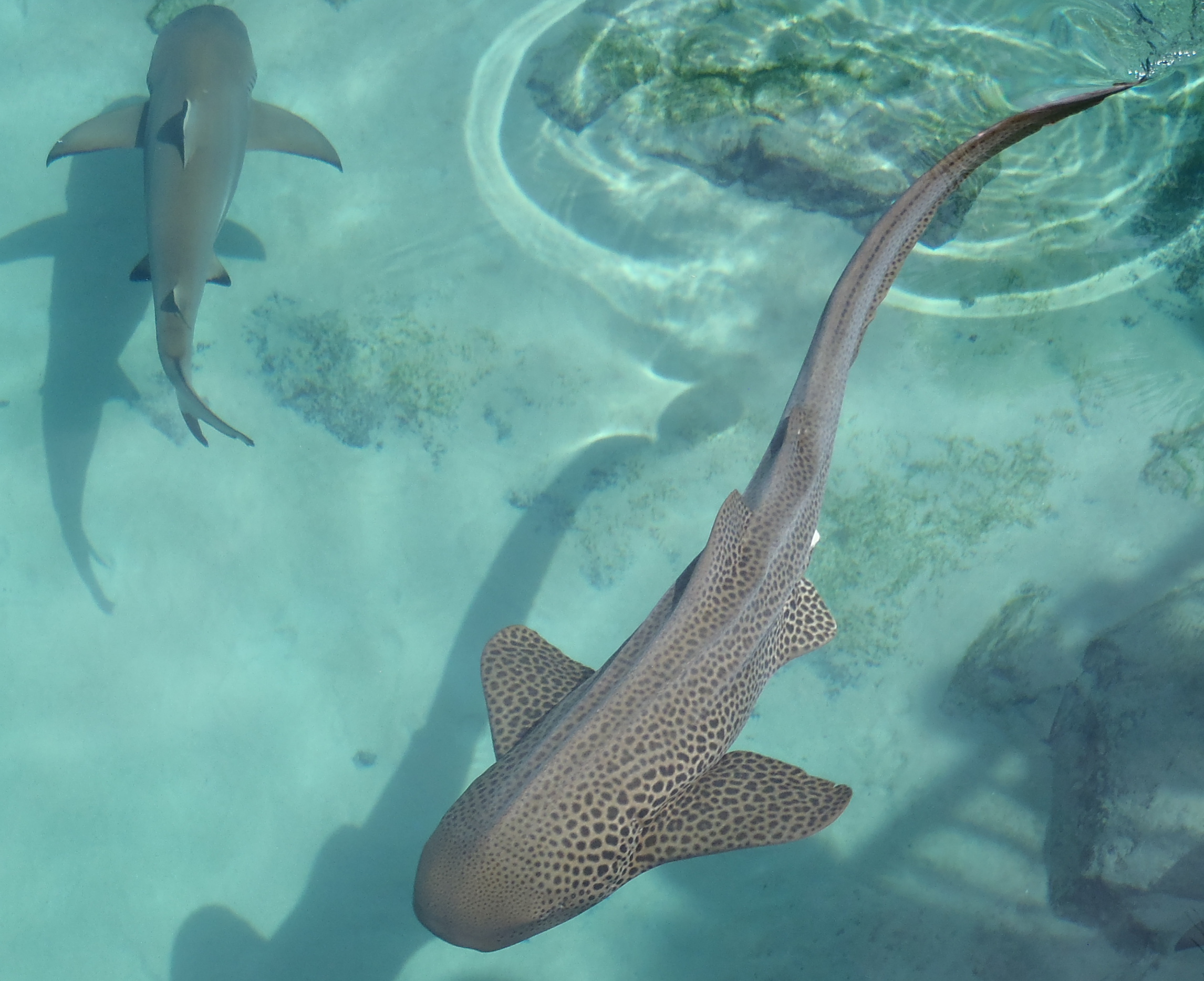 So then we had lunch.

I think there are some decently healthy options but I never feel like eating them while I’m on vacation. I did eat that salad though. And that cheesecake.

We hung around the animal encounters kiosk quite a bit and I was really hoping they would bring out a sloth. A lot of times it’s a macaw, which is great, but I see them all the time. Finally, at 3:00, a zookeeper brought out a sloth. I finally got to touch one and that was really neat. They are fascinating to look at up close. Their eyes are such an unusual color and they stare upwards all the time.

After that we did the Wind-away River and Tropical Oasis one more time and then we called it a day and headed home.