We drove to Lava Mountain Lodge in Dubois from Denver. It only takes about 6 1/2 hours so we were there by 4 pm. We checked in, ate some sandwiches, then decided to drive to Grand Tetons National Park for the evening. Our plan had been to spend all day Sunday in GTNP but since we had several hours to kill we figured this way we could see more of the park.

It was only about 45 minutes to Grand Tetons. The first thing we saw when we got inside the park was a big buffalo herd! It was really exciting and we stopped and took pictures. Little did we know that after about 48 hours buffalo herds would no longer be exciting! 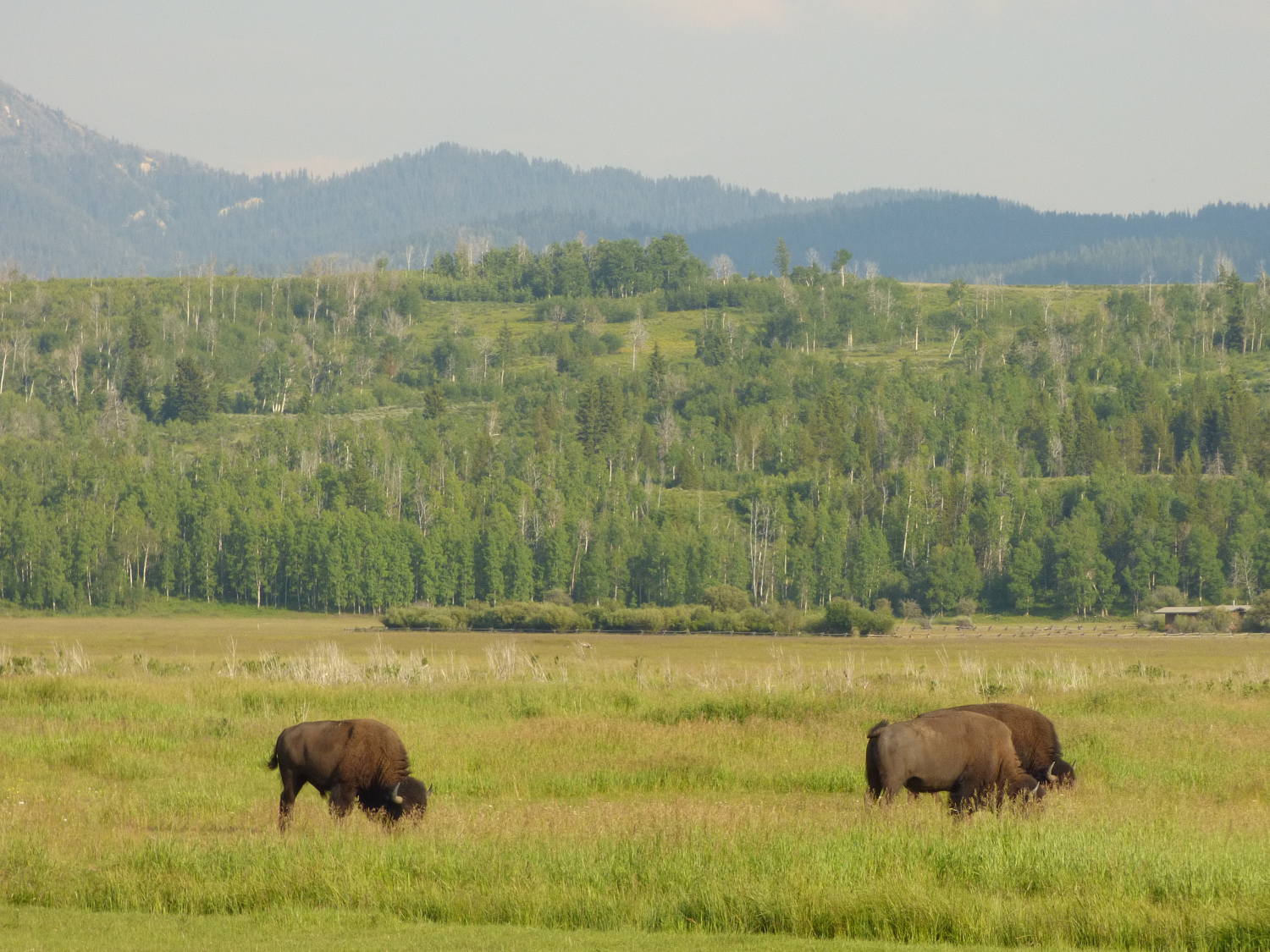 Then we drove down almost to Jackson Hole. We turned around at Moose and went back up through the park along Teton Park Road. The mountains are so beautiful. Before the Mountain View Turnout we turned on Jenny Lake Road, which is one way and has a very slow speed limit because of wildlife and hikers. Right past the lodge we saw a young grizzly bear coming up towards us! We stopped the car and started taking photos. It stopped right next to the car and started digging in an anthill, just like it was posing for us. We took a short video and then started moving so the car behind us could also get good photos.

At this point we hadn’t been away from Denver for more than 8 hours and we had seen a grizzly bear and buffalo. Almost too good to be true! I was so excited. I told my son I couldn’t wait to see more bears and he said “I bet you ten bucks that’s the only grizzly we see the whole trip!” So I made the bet, because of course we would see more bears. We were in Grand Tetons and going to Yellowstone, after all.

After the bear we drove a little ways and then got out at Jenny Lake Overlook. We were so excited about the bear that now I was sure we would see them everywhere we went. The lake was beautiful and the sun was near setting. The Grand Tetons are so beautiful, even prettier than any of Colorado’s mountains in my opinion. Then we drove north up Grand Teton Road and stopped at Chapel of the Sacred Heart. It has a really nice view of the lake. We walked down to Jackson Lake on a little trail and took some pictures. We forgot our bear spray and were not sure how important it was that we carry it. You never know until you need it.

After that we drove back to out motel and went to bed.

The next morning we headed back to GTNP. On the drive in we saw a moose in one of the beaver ponds along the way but didn’t bother to stop because we see moose in Colorado all the time. I had researched several trails and hikes and we had decided to do the hike from String Lake to Hidden Falls, which is on the west side of Jenny Lake. Everything was going well until we realized that, once again, we had forgotten the bear spray. And extra sun screen. We were carrying these little aspen walking sticks that my mom had made, so we made the not very great decision to keep going, thinking we could fend off bears with the walking sticks. This was probably stupid, but it was a frequently used trail according to our guide and therefore less likely to have bears on it.

It was hot, much hotter than it should have been at that altitude but they were having a heat wave. Thankfully the trail around the lake has a lot of trees and places to stop and sit in the shade. There were also a ton of gorgeous wildflowers, chipmunks, birds, and squirrels.

The hike to the falls was supposed to be about 2.4 miles each way total but it seemed like we got to the shuttle boat dock really quickly. It was a really easy hike but then we started up the hill to the falls and it got steeper. The falls are so beautiful! We were really glad we chose that hike.

When we got back to String Lake we sat and ate granola bars and drank water. String Lake is also really pretty. There were people paddle boarding on it and that looked fun. We decided on the walk that the walking sticks were a massive pain to carry and we never brought them on another hike.

We drove up the winding road to the top of Signal Mountain because the views were supposed to be really good. They were beautiful.

By this point my daughter was complaining a lot about the bugs and we had all noticed that the bugs really seemed to like my son. He had more bites than anybody and they seemed to swarm around him. He covered himself with good bug spray, the kind with DEET. The citronella stuff won’t do you any good at all in the grand Tetons and Yellowstone so don’t even bother with it. I went to Costco before the trip and got a big pack of environmentally friendly bug spray with citronella and some other herb oil in it. It did exactly nothing to keep bugs off of us. Thankfully I had also brought a couple bottles of Cutter with DEET because that was the only thing that worked.

We drove to Leek’s Marina Pizzeria for a late lunch/early dinner because it got fairly good ratings on Trip Advisor. The pizza was ok, the beer was really good, and the views were pretty good if you sat outside. Considering it was National Park food it was hard to complain and it felt really good to sit and watch the lake while we ate.

We saw more buffalo herds, some elk, and an eagle. We stopped at Jackson Lake Dam and skipped rocks for a little while before heading back to the Lava Mountain Lodge.

End note: When we got home we found out that on the day we did our hike there were mountain climbers up on the rocks above the falls. They found a big new crack in the rock due to seismic activity, and the trail to Hidden Falls was closed after we were there. So it’s a good thing we went when we did. Also, this was a last minute trip so none of our lodging choices were ideal, except Lake Lodge in Yellowstone which was really expensive last minute. If I could re-do the trip I would have stayed at Jenny Lake Lodge or one of the other lodges in Grand Tetons the first night.

Oh yeah…we never did see another bear! We saw elk, moose, antelope, mule deer, bison, and even two wolves but we never saw another bear on the trip. So I had to give my son $10.