We try to do something new every trip. We had never been to Canaveral National Seashore, and I had a valid National Parks pass, so off we went! This park only costs a couple dollars to get a carload in. I think it was $3 if you didn’t have a pass. We stopped at several places in the town of Titusville thinking they would have beach toys, but nobody did. So make sure to get them at Target or Walmart before you head to CNS. Anyhoo, it was a very windy day in October. Apparently there was an offshore storm heading up the Atlantic coast and that made for some really big waves. The salt spray from the water kept covering my camera lens so some of may photos are blurry.

We stopped at the Apollo Visitor Center, which is small but interesting. There is a nice restroom there if you need one. They gave us a map and some informative pamphlets. We bought a couple hand-crocheted finger puppets (proceeds went to the park). Then we headed to the beach area, and parked in Parking Area 1.

We walked over the dunes via the walkway and realized it was way too windy and dangerous to get in the water. The waves were bigger than I have ever seen them on the Atlantic. So we stood and watched the water for a few minutes and my daughter said she saw a dolphin. I looked to where she was pointing, right in front of us, and saw what was in fact a pair of lemon sharks frenzy-feeding right up at the shore. I had no idea sharks would come up on the sand like that.

We watched this for about 15 minutes. Here are some of my best shots. 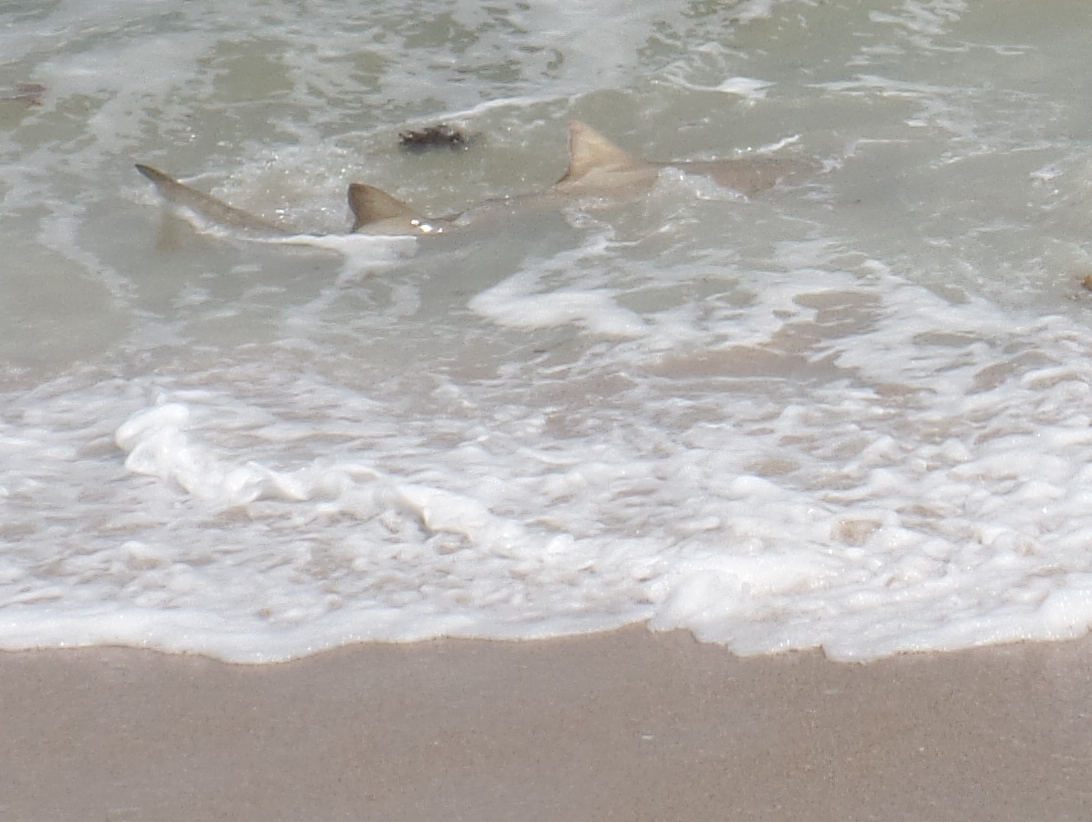 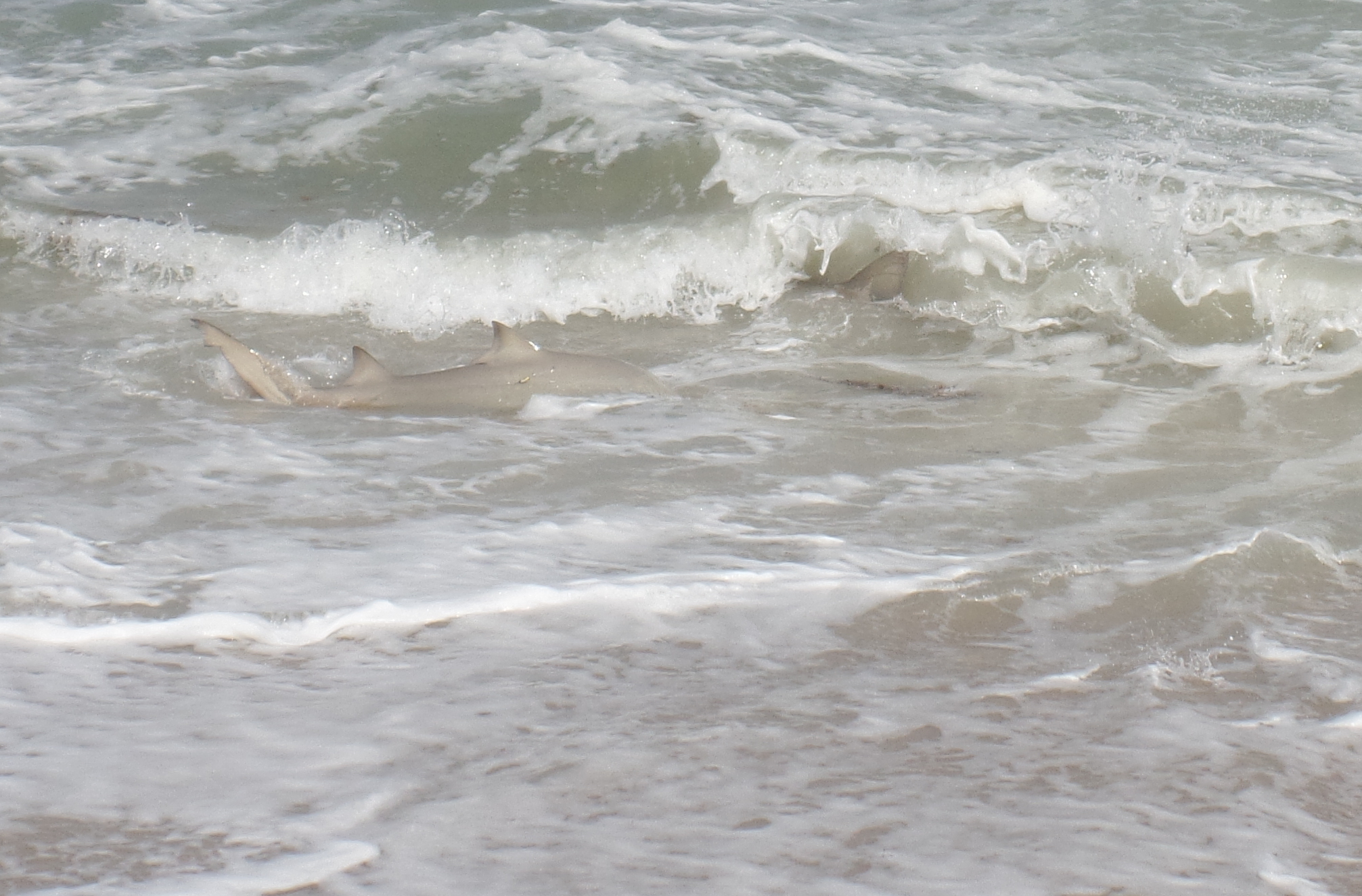 I will admit I was a little freaked out. The wind was so loud and the sharks were really going at it. There must have been a school of fish right in front of us that we couldn’t see.

We drove the short distance to parking area 2, since we obviously couldn’t even put our feet in the water at parking area 1. The first thing we saw was this: 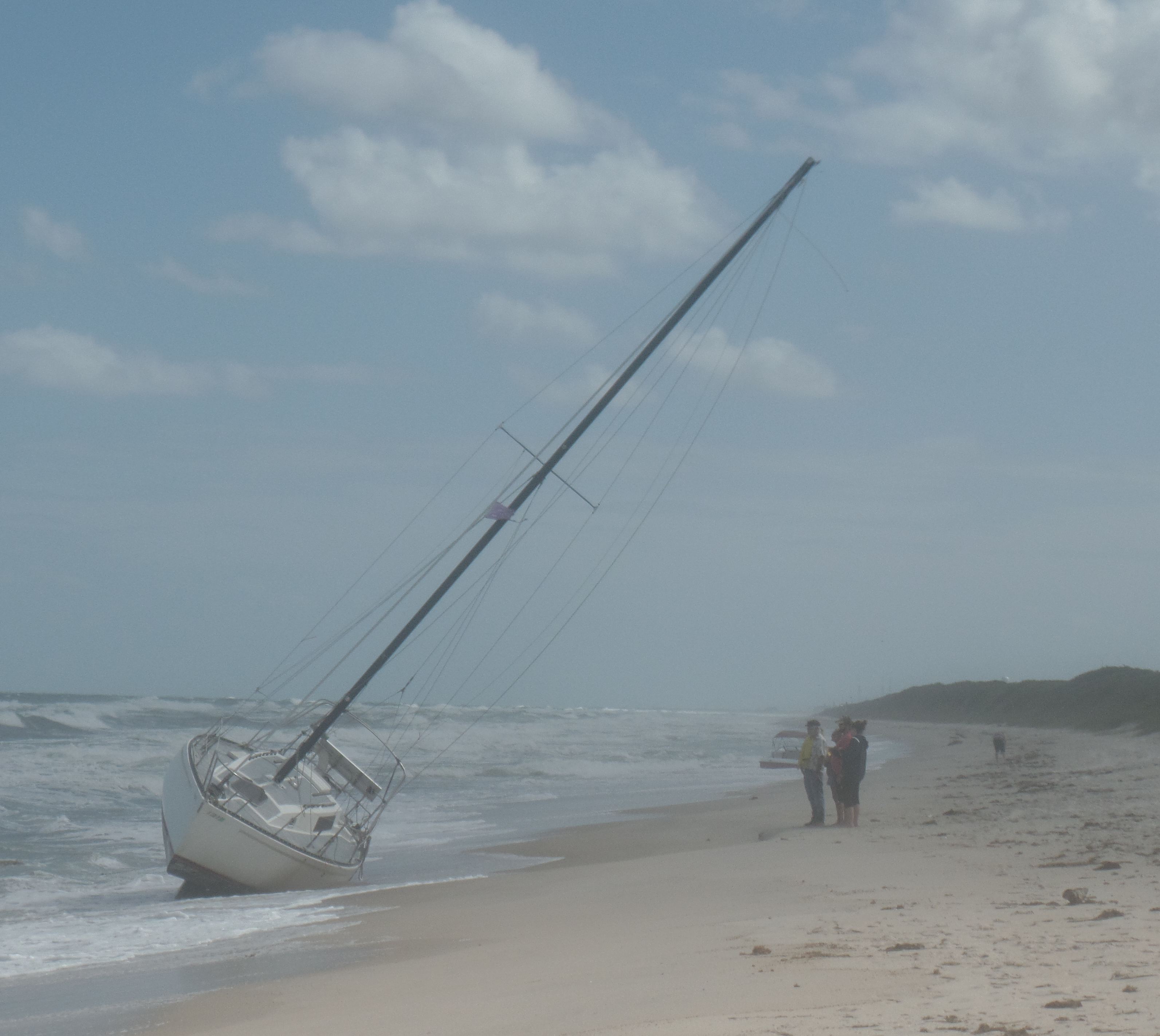 Apparently the storm had ripped some boats out of their marinas, and they landed here. We chatted with the small crowd of onlookers, and bemoaned the fate of Elinora the Sailboat. Then the two men decided to try to drag the dinghy out of the water. 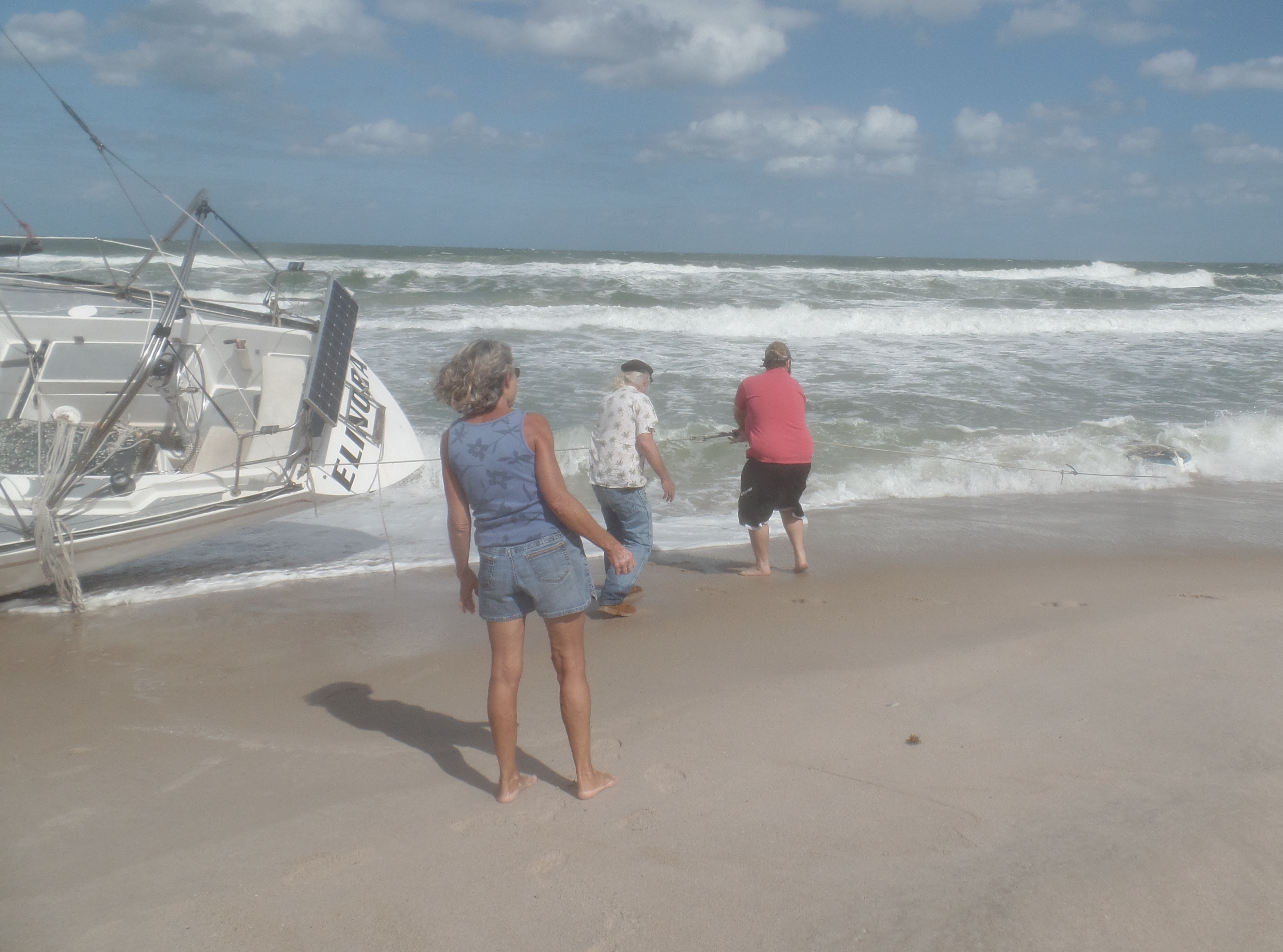 Alas, it wouldn’t budge. We walked southwards and past another smaller boat. You could smell the gas leaking from it and it looked like it had seen it’s last day at sea. The Elinora might have been salvageable, but I know nothing about boats.

We walked back up towards Elinora and saw a guy running up the beach. He was carrying a seabird. He said that the vultures had been starting to peck at it because it couldn’t fly. 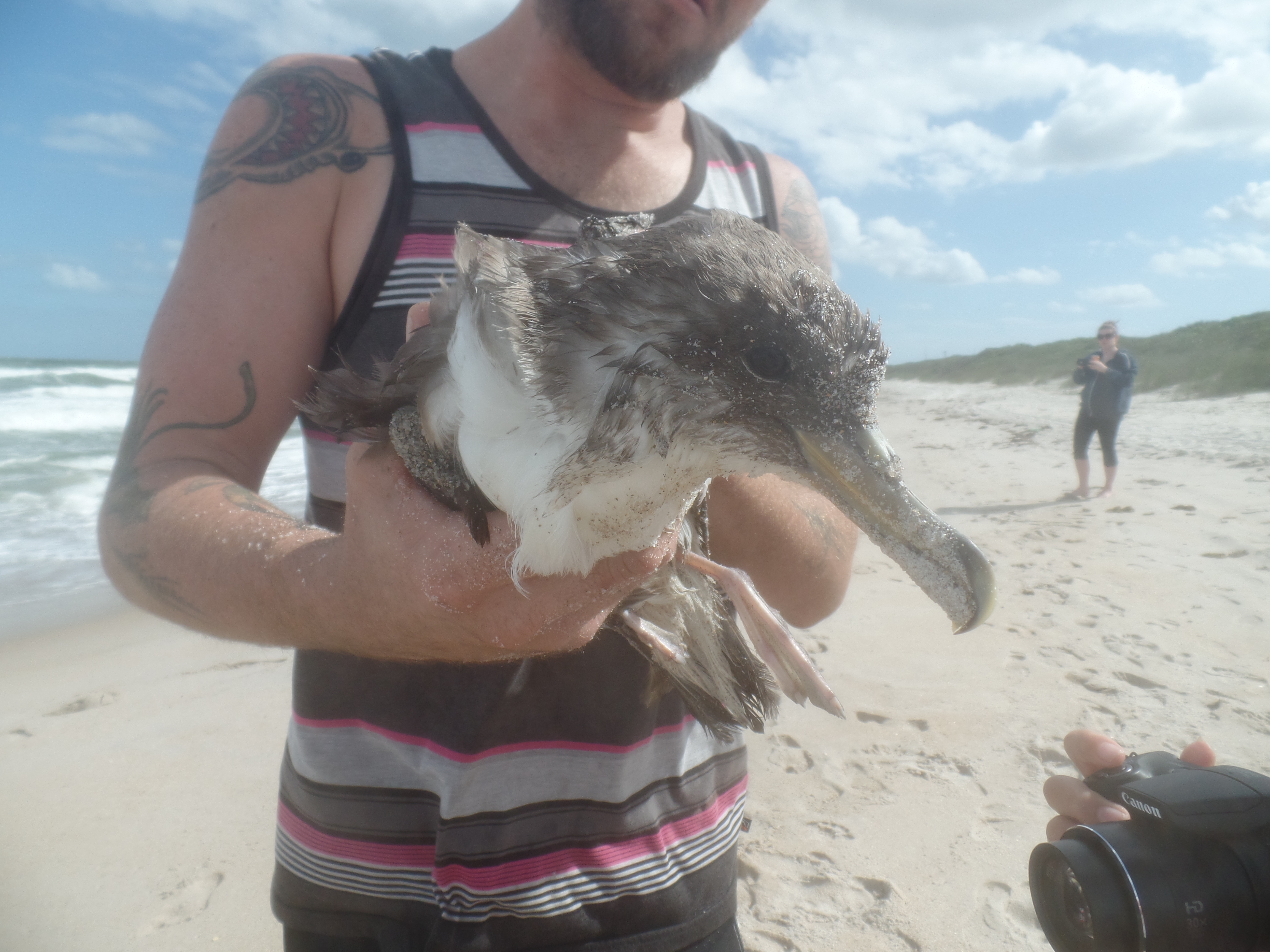 I am pretty positive this is a Cory’s Shearwater, having a very bad day. The man who saved it was taking it to the visitor center so they could help him get it into rehab. Maybe SeaWorld comes and picks them up, or maybe there are bird rescues in the area. I hope the bird was ok. He didn’t seem scared at all but maybe he was just in shock. 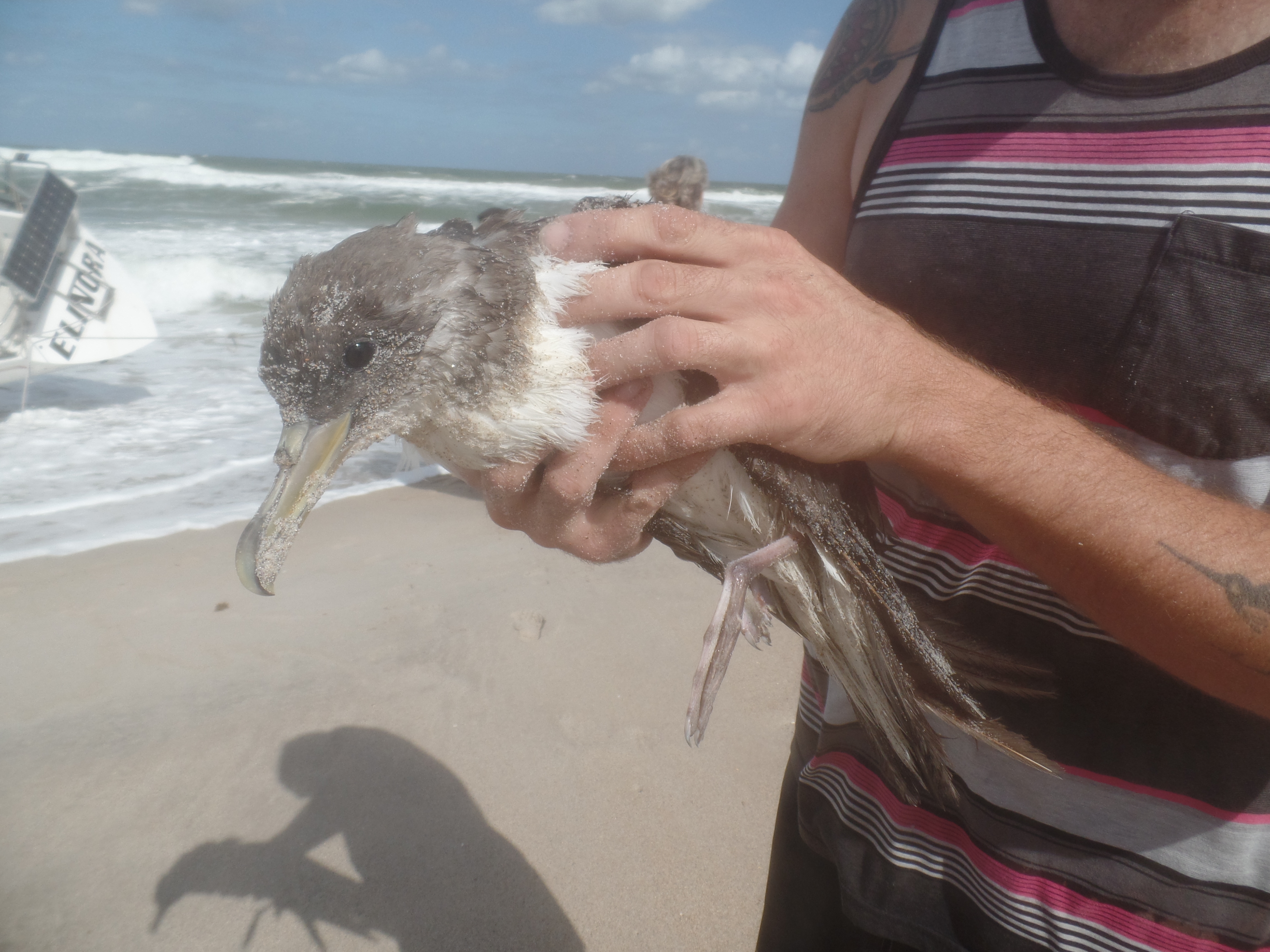 Then we drove up to Parking Area 3. Not nearly as much excitement there, mostly we just watched the Ospreys soaring and diving. There are a ton of them at this beach.

There were also sanderlings, vultures, and a lot of recently hatched turtle nests.

That was our day at the seashore. We didn’t make it to the Manatee Observation Deck because the bridge was out but I am sure we will return soon!