As soon as the school year ended in May my daughter and I drove to Estes Park, Colorado. We stayed in a hotel that was walking distance to all the downtown festivities and about a 5 minute drive to Rocky Mountain National Park. Before checking in we had a picnic at the Lawn Lake trailhead where there are always a lot of Stellar’s Jays and Magpies. They did not disappoint but they are hard to get pictures of. 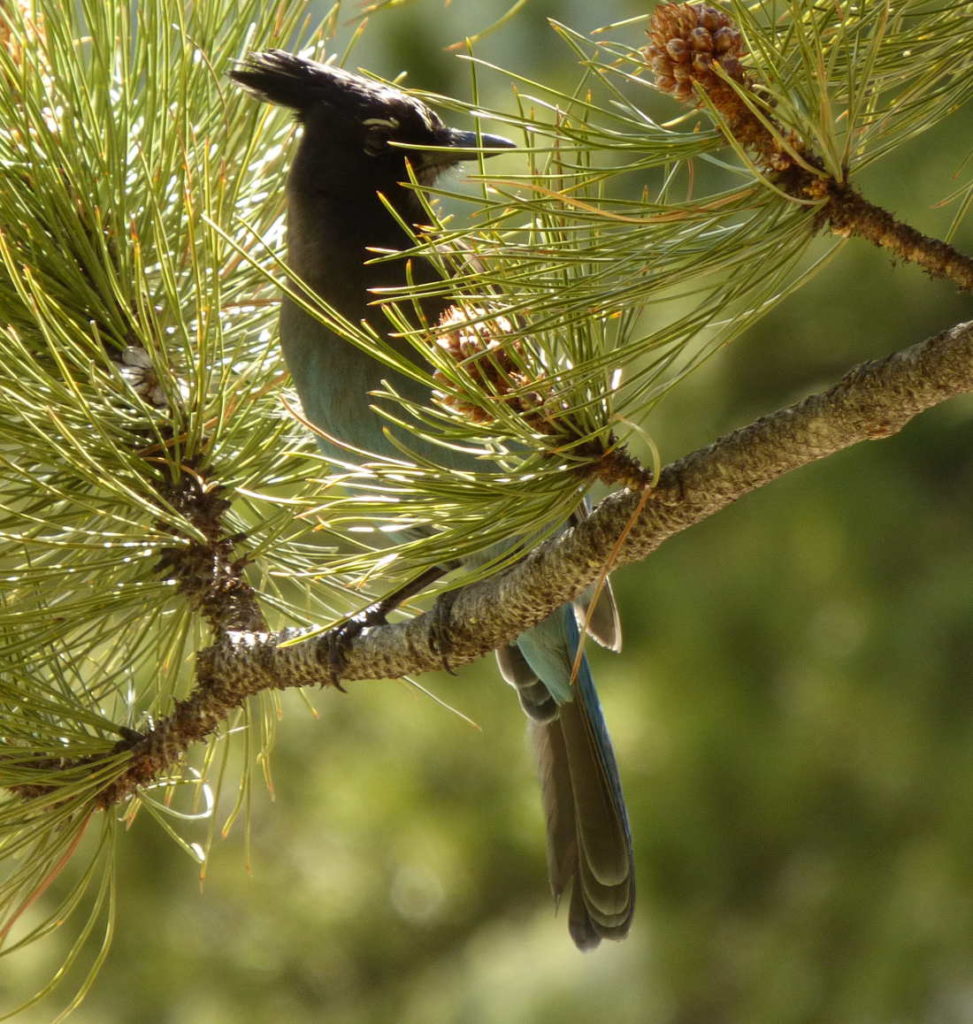 After checking into the hotel we decided to try the Emerald Lake Trail. Parking for this is at Bear Lake, which is one of the busiest areas. We got there around 5 pm so there was some parking.

In May hiking in Colorado is tricky. There is a lot of snow melting, so often trails are flooded, plus there is still snow on some trails. You’re never quite sure what to expect so you just have to wing it. This hike started pretty well. We both wore Columbia hiking sandals but everybody else we saw was wearing actual hiking boots. I will explain in a minute why this didn’t really matter, because either way it wasn’t very comfortable.

We were greeted by a ground squirrel almost immediately so this trail rated high with my daughter.  The trail is pretty steep and you start at about 9450 feet above sea level. Even though we live at 6000 feet this still seems high and the air is noticeably thinner. By the time we reached Nymph Lake we had met a few chipmunks and another ground squirrel. So far so good. Nymph Lake is beautiful and we stopped for pictures but then we chugged along towards Dream Lake. 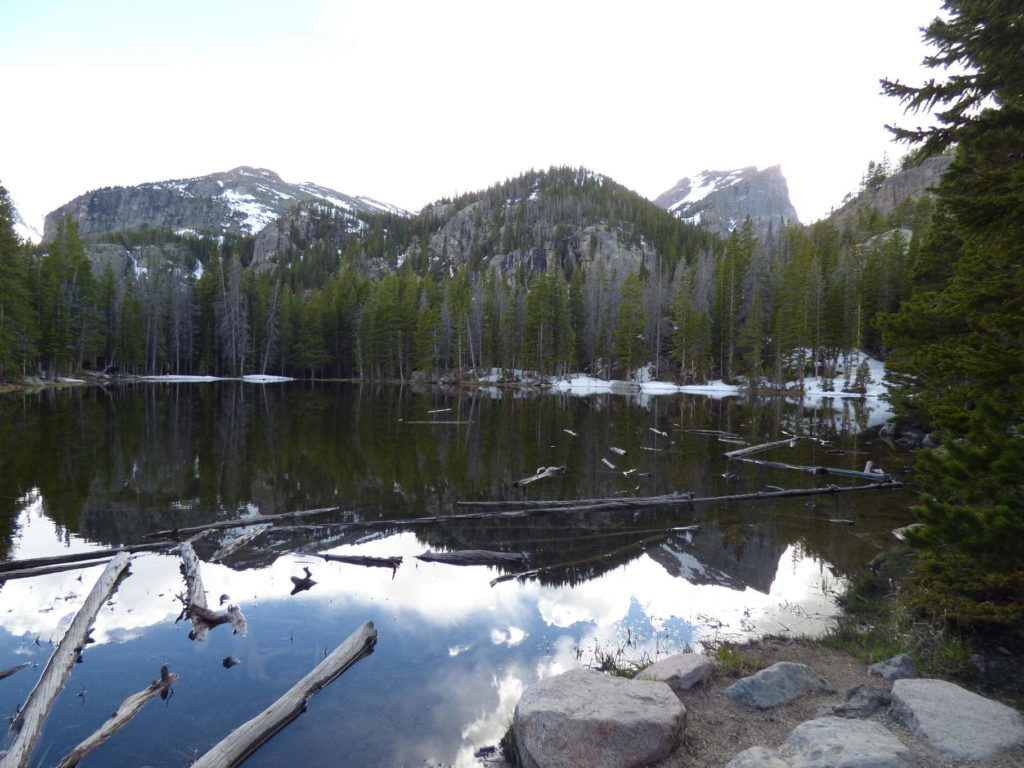 Before Dream Lake we encountered huge patches of snow on the trail. It wasn’t just snow, it was melting snow and it was really slippery. We were able to walk over it but in steep areas this was really tricky no matter what shoes you were wearing. Lots of people slid on their butts or just flat out fell. As we climbed we ran into big areas of standing water covering the trail, so it was better to be wearing the sandals because they dried off immediately. We turned back before we reached Dream Lake because it was getting late and we were starting to think about pizza.

The hike down was easy and quick. The chipmunks and ground squirrels came out again as we walked by. The busier trails like this always have the friendliest inhabitants because people give them snacks, which is illegal but people do it anyway. They are so stinking cute though. 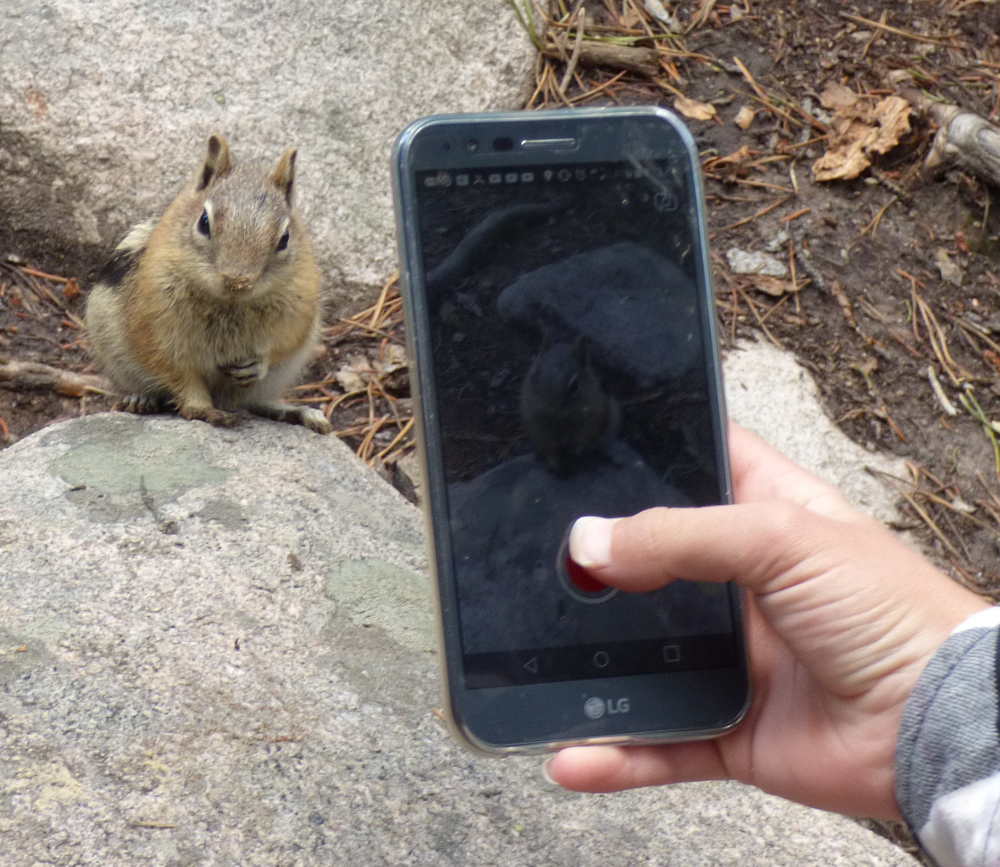 After we left Bear Lake area we drove through Moraine Park. We turned towards the Cub Lake Trailhead and drove around looking for elk. We saw quite a few very pregnant cow elk. After that we went and had pizza in Estes Park at a little place across the street from out hotel.

In the morning we drove up over Trail Ridge Road and into the Kawuneeche Valley. Kawuneeche means “valley of the coyote” in Arapahoe. There are a lot of coyotes in the valley, plus in summer and fall there are a lot of elk. This is also the best part of the park to see moose down in the willows along the Colorado River.

For our first hike we parked at the Green Mountain Trailhead and crossed over into the valley. According to our map there was a trail but we promptly got lost and ended up walking through employee housing cabins. Then we headed into a dark forest on another trail which was kind of spooky. So we walked back to the car and went to the Colorado River Trailhead, which is my favorite hike in the park.

This trail is best to do on a hot day in July when you are sick of climbing steep rocky hills, or maybe you just want some quiet time on a nice river walk. I have seen some incredible deer and birds on the trail before. But for now, the people were sparse and the river was running really high. In a lot of areas the river completely covered the trail, so once again we were glad we were wearing sandals. We encountered people taking off boots and trying to walk through the water barefoot, but then their feet were muddy. Like I said before, May hiking is challenging. We were happy with our sandals.

The best part about this trail are the big open meadows that you come upon. They are filled with butterflies and birds and remind me of something out of a fairy tale. The sun feels really warm on your face at that altitude. We had a small picnic in one of the meadows and my daughter took a little snooze while I took pictures. 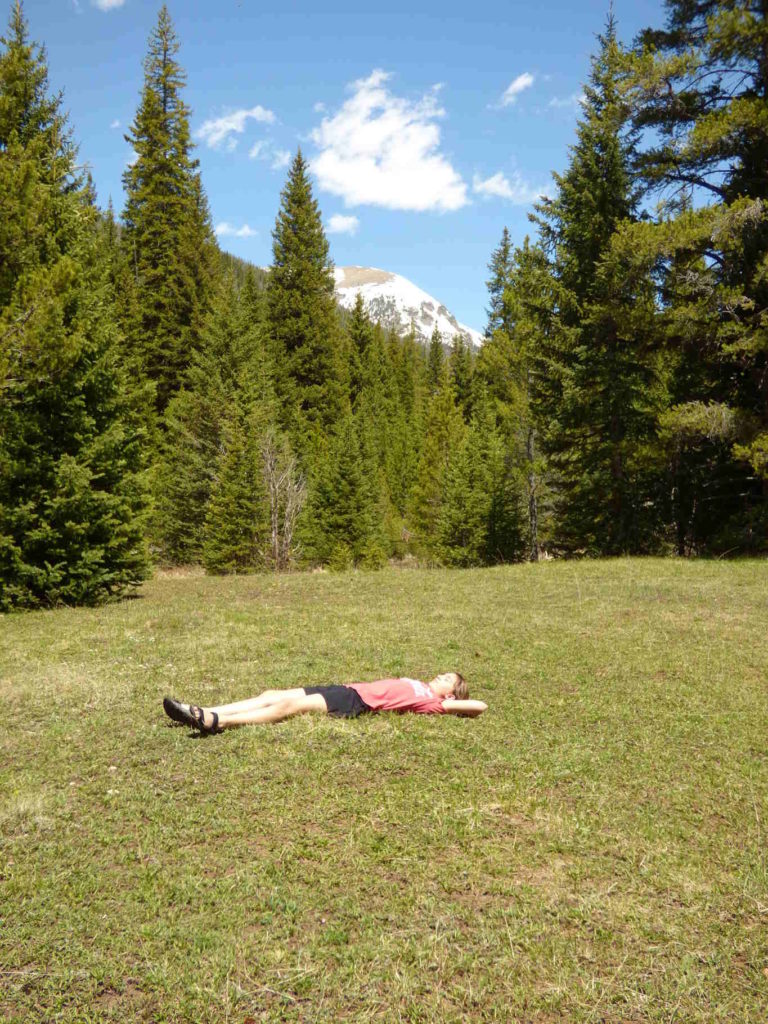 After that we drove to the Coyote Valley Trailhead. It’s a really flat hike along the river through the valley. There are some really beautiful views and often elk herds in the valley. There was hardly anybody else there. Then we drove north and saw an animal jam, so we pulled over to see what it was. There was a mama moose and her baby down in the willows. She was hard to get a good picture of and the baby was barely visible but it was still pretty cool.

We drove up and over Trail Ridge Road and decided to go to Sprague Lake since we had never been. Of all the times I have been to RMNP before I just can’t believe I never stopped at this lake. It’s so beautiful! There is an easy trail around the lake and the views are just unreal. There are adorable ducks in the lake and chipmunks everywhere. There were elk right next to the lake, grazing. It was such a surprise and immediately became a must-stop destination for me.

On a side note, I have been to Sprague Lake on two day trips since then, and both times there have been moose in the shallow lake eating whatever grows in there. But I will write about that in a day trip.

After we left Sprague Lake we drove up towards Cub Lake Trailhead and parked. There are a lot of places to pull over and walk around by the Big Thompson River.

Saturday we got up early so we could get parking at the Cub Lake Trailhead. We got there just as it was almost full. Our plan was to loop around and come back down the Fern Lake trail.

The trail starts out fairly flat and meanders through a beautiful meadow with some ponds. There were a few marmots and lots of chipmunks so my daughter was happy. 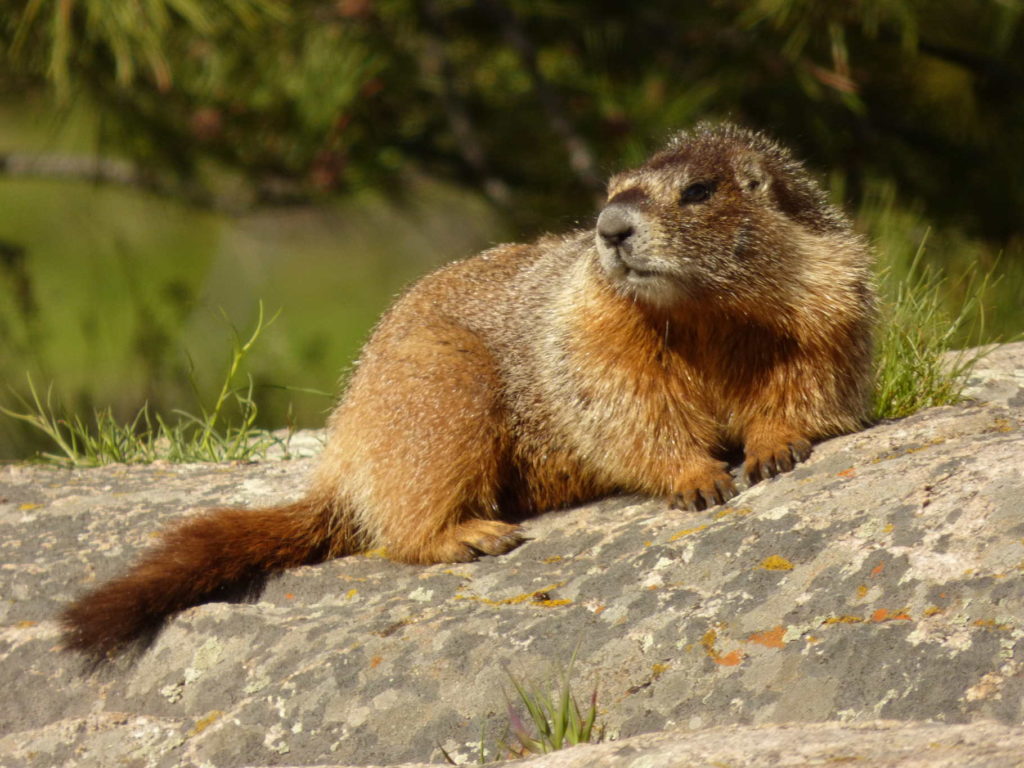 After quite a while the trail gets steep and then you are zigzagging up a steep rocky hill. It started to seem like it would never end. Then a woman passed us coming downhill and she assured us that Cub Lake was just “a couple minutes” further. When somebody going down a hill that steep says “a couple minutes” that means more like twenty minutes for you, going up. And that’s about how much further it was.

Ok so Cub Lake wasn’t the most spectacular looking lake.

It’s filled with lily pads and the surrounding area was burned in a wildfire fairly recently. But still, we made it to our destination and we were happy to stop and have a snack. Then we started down the other side to the Fern lake trail. We were happy to be going downhill at that point. There were a lot of burnt trees, some waterfalls, ground squirrels, and a ton of clematis blooming on the steep slopes. 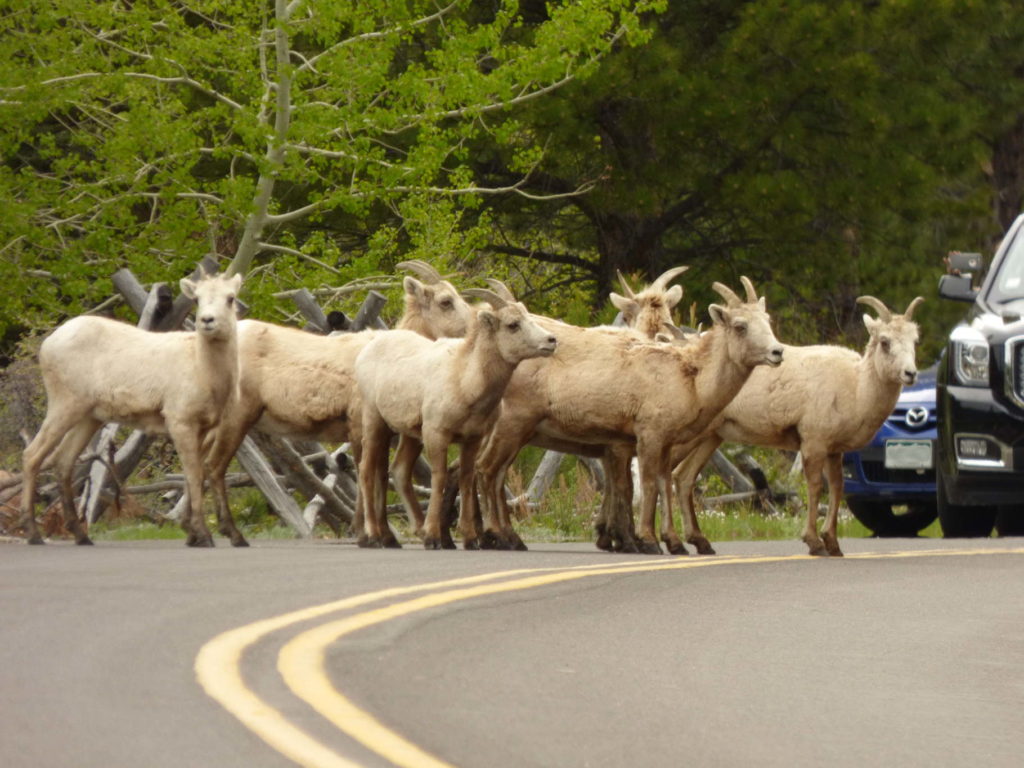 We drove back towards Estes park and at Sheep Lake we were stopped by a park ranger. There was a big herd of Big Horn sheep with babies trying to cross the road so they made everybody stop. Park Rangers are federal officers and they can and will arrest you if you do something stupid, like try to drive past them when they tell you to stop. Which somebody did. They then decided to lead the rangers on a small chase which was sort of hilarious. I mean where were they going to go, and their car was in everybody’s pictures because we were all photographing the sheep when they tried to drive through them. Anyways, blue Mazda sedan dude, I don’t feel sorry for you.

After this bizarre episode we saw quite a few more elk, both bulls and cows. They are so tame you can pretty much walk up to them but that’s not smart, especially if it’s a bull with his harem of cows that he worked so hard to get. We also saw some mule deer which are way more cautious than the elk.

My daughter wanted to go back to Sprague Lake so we went there. The sun was starting to set and there were elk grazing nearby again. As we were driving back towards Estes Park we saw a big herd of elk in a meadow and stopped for some sunset photos. No matter how hard I try I can never get my photos to come out nearly as good as they should. Maybe it’s my camera but it’s probably me. Anyway, look at the photo below and imagine what it might look like if Ansel Adams had taken it. Because it did look like an Ansel Adams scene but I am not Ansel Adams. 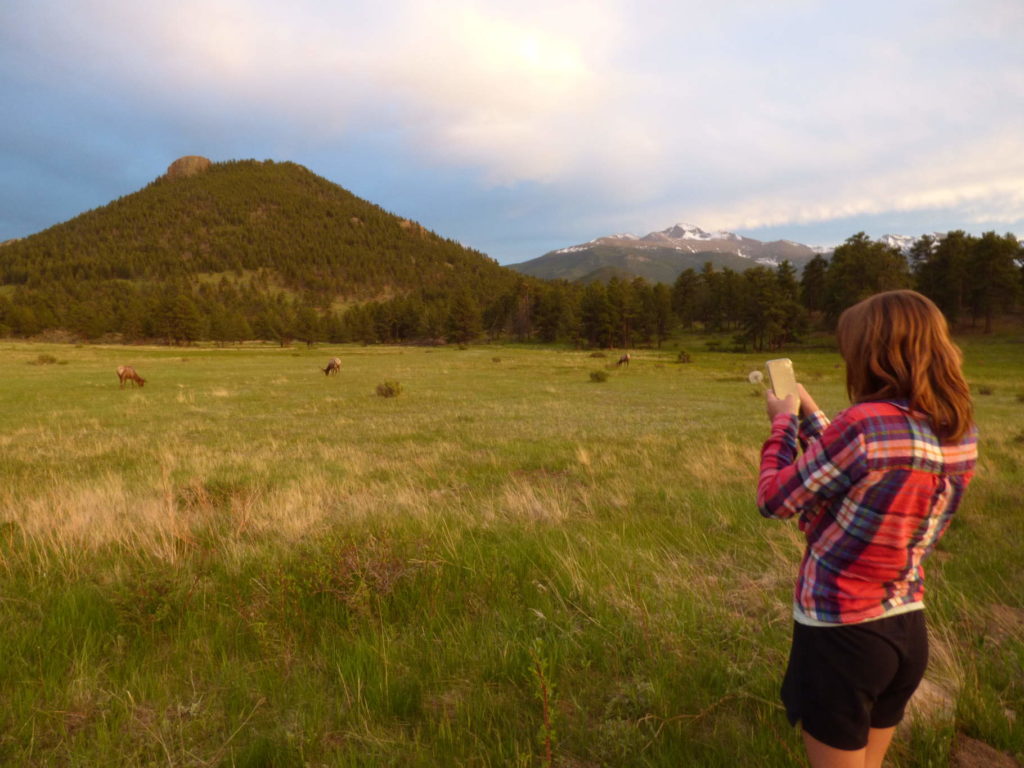 Sunday morning my daughter wanted to try the Emerald Lake Trail again because it had the most chipmunks. So we tried it again. It was more crowded than it had been Thursday night but it was tolerable.

We were more determined this time and we both wore sandals again, even knowing we would encounter snow and snowmelt. At least they dry off, and wet boots are miserable and give you blisters.

We made it up to Dream Lake, which was even prettier than Nymph Lake.

But here we were forced to turn around. The rest of the trail to Emerald Lake was covered in slippery deep snow. The people who were wearing hiking boots were now in wet boots, and we sandal wearers were not about to hike the rest of the way through two feet or more of snow. So basically we were all turned back at Dream Lake, which was fine. We took our time walking back to the car and said goodbye to chipmunks and ground squirrels.

After that we drove home. It was a short trip but it was really fun and I had a great time. I love Rocky Mountain National Park, it’s my favorite one.

Previous Post: Solo Trip to Disney and Universal Orlando Theme Parks
Next Post: A Visit to the Tower of London