Venice Beach is definitely not one of the cheaper places you can visit. Even a lower end AirBnb is about $120/night, and that is for a very small studio apartment five blocks from the boardwalk. But surprisingly Venice beach itself is affordable and there is a ton of free stuff to do right there on the boardwalk.

A brief list of everything there is to do at Venice Beach for free: Basketball, beach, skate park, tagging park, raquetball, outdoor gym, volleyball, surfing, skateboarding, cycling, scooters. If you don’t have your own you can rent surfboards, skateboards, bikes, and scooters.

We stayed a few nights at an Airbnb in the Pearl Apartments which had a private garage. If you don’t have private parking in Venice Beach it can be really difficult to park. It was a short walk (under 10 minutes) to the boardwalk. But wow was it a tiny apartment. It had a murphy bed that took up most of the main room, a tiny kitchenette, and a bathroom. The apartment grounds were really nice though.

At the boardwalk there were a ton of people running, cycling, etc. Lots of people playing basketball, working out at Muscle Beach, riding scooters, etc. It was a festive environment. There was a lot of pot smoke in the air. Guys were handing out their “free” reggae cd but then asking for money.

The first thing we did was use Google maps to find the Arnold street art at Muscle Beach!

Arnold isn’t the only street art. There is a lot of it on building all up and down the boardwalk. Most of it is really good.

We walked out to the water and watched the surfers. It was cold for surfing (March) and they were all wearing wetsuits. Even standing on the beach it was chilly. The wind was pretty intense and there were high surf warnings.

We watched for a while and then walked back over to watch the guys play basketball. I loved watching them. Some of them were really good and it seems like a lot of them know each other and probably go there a lot. 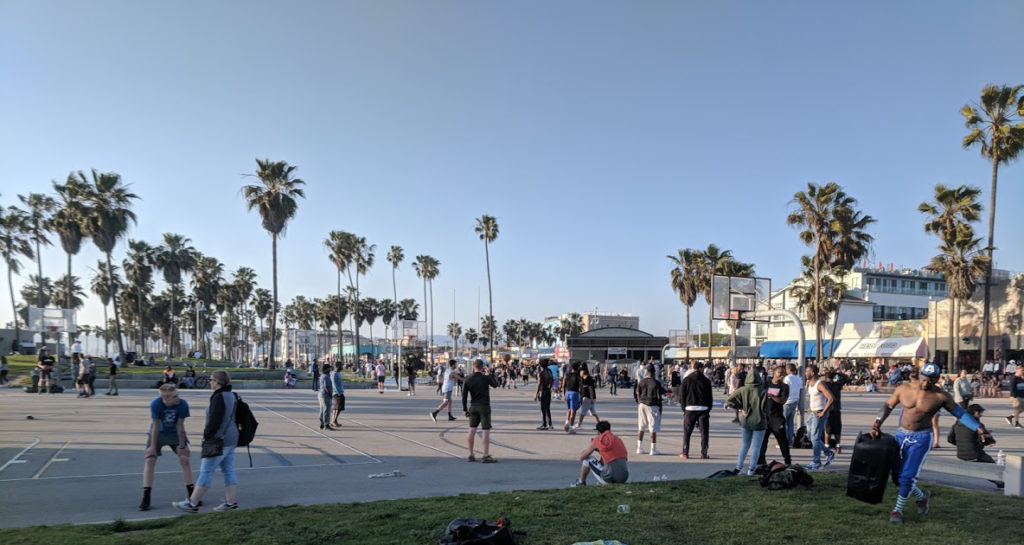 I noticed chunks of tar on my flip flops and googled it. It is apparently from natural sources and washes up on the sand. I grew up going to Los Angeles area beaches and have never heard of that before. I left the flip flops on the small balcony and rubbed them down with vegetable oil. After wearing them a few more times it had all worn off.

We drove to Malibu and Palos Verdes but most of our week was spent hanging out around the boardwalk. It was fun. We skateboarded, rented scooters, played soccer on the beach, and ate several times at The Whaler.